Nashua Center for the Arts 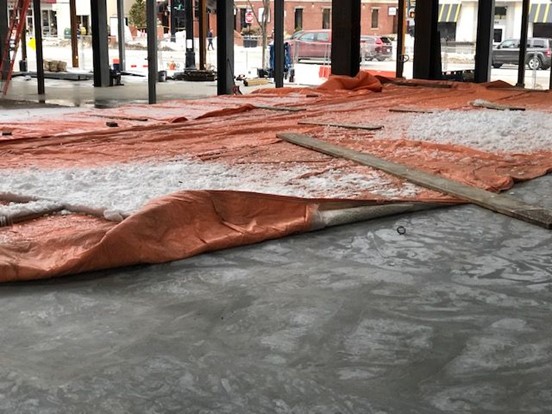 Last month we showed a photo of the stage floor with bolts everywhere.  Above is the reason for the bolts – in the photo you can see the reinforcement for the concrete subfloor on the stage, as well as the cast concrete foundation for the balcony seating.  The second photo shows the poured concrete on the stage under the tarpaulin.  The last step to finishing the last three inches of the stage floor will not happen until near the end of construction to protect the wooden surface while installing the rigging, lighting, etc.  Below is a photo of the stairwell next to the West Pearl Street entrance and lobby. 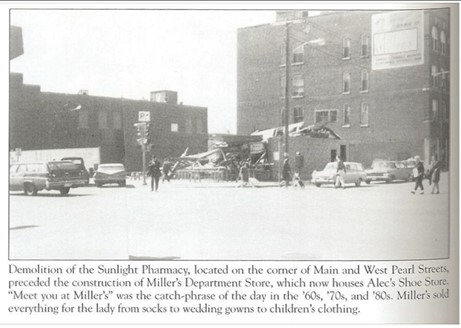 Here is a photo from Mike LoRe’s collection of everything Historic Nashua.  It shows the corner of West Pearl and Main Street right after the Sunlight Pharmacy was demolished to make way for Miller’s.  You can see the east wall of the Dunbarton Building (now the back of house for the Nashua Center for the Arts) looking much the same as when the Miller’s/Alec’s building had its turn with the demo crew. The Dunbarton Building was built circa 1898.  The building on the corner originally housed the Crockery Furniture company, built earlier in the 1800’s before the Dunbarton building (see photo below). BLENDING THE NEW AND THE OLD Above is a view of the area that will be the VIP Lounge on the third floor showing an original window from the building. Wherever possible, Harvey Construction is keeping the historic aspects of the Dunbarton Building, including exposed brick walls, original pillars, and trim around the windows. The exterior brick walls are twenty inches deep.