Steady as a Beating Drum

Steady as a Beating Drum

There’s a tendency to view rock drummers as the most unhinged members of a musical group, maniacs who are most at home behind a drum kit because it gives them an opportunity to hit something very fast and hard, all night long. Think of Nirvana’s Dave Grohl, face obscured beneath a cloud of caveman hair as he thrashes the cymbals; of The Who’s famously frantic Keith Moon, whose destructive antics onstage were outshone only by the drug-fueled fireworks of his personal life… of Animal from the Muppets, who seems less and less like a fuzzy caricature the more you learn about the other hard-partying drummers who inspired him.

And then there’s Max Weinberg.

At first glance, there’s more than a whiff of a quiet, respectable college professor about

him. Bespectacled, grey-haired, with a somber-colored vest and button-up shirt, he seems the kind of figure who wouldn’t be out of place in the buffet line at a local chamber of commerce fundraiser; or if it’s a weekend, perhaps the one wearing the most broken-in pair of Dad jeans at a backyard barbeque. There’s nothing, in short, to outwardly suggest the man as the backbone of one of the mightiest, sturdiest, and most rollicking musical acts in rock history - and yet the truth remains that, for close to half a century now, Max Weinberg has been the thunderous heartbeat of Bruce Springsteen’s “heart-stopping, pants-dropping, house-rocking, earth-quaking, booty-shaking, legendary” E Street Band.

Born in 1951 to Jewish parents in Newark, New Jersey, Weinberg picked up his first drumsticks at the age of six, and learned his craft playing at everything from bar mitzvahs, high school dances, and small club bars. In 1974, he answered a newspaper advertisement placed in New Jersey’s Village Voice calling for a drummer who was “no junior Ginger Baker” - in other words, who preferred to play steady, reliable tempos rather than launching off into wild solos - and one brief audition later, found himself as a core member of Bruce Springsteen’s fledgling E Street Band, a position he has retained ever since.

When Springsteen, in his trademark husky voice, famously counts out “huh-one, two--” to usher in the next song before stadium crowds tens of thousands strong, he is answered nine times out of ten by Weinberg’s signature powerhouse drumming, evident on songs like “Badlands,” “Prove It All Night,” “Hungry Heart,” and “Dancing in the Dark.” Springsteen’s epic (and epically misunderstood) song about the hardships of forgotten Vietnam veterans, “Born in the USA,” opens and closes with titanic drum beats like cannon fire, and Weinberg throughout sounds as though he’s playing his kit with a pair of rifles rather than sticks, colloquially earning him the nickname of “Mighty Max.” 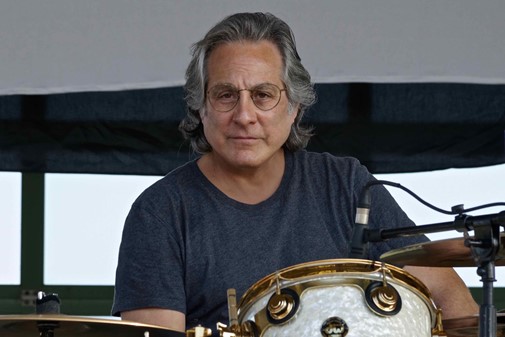 During a hiatus from the E Street Band and its touring obligations in the 1990s, Weinberg became the bandleader for Late Night host Conan O’Brien, and while there, gained widespread fame and attention playing drums as part of the Max Weinberg 7 for the duration of O’Brien’s tenure with the show.

Weinberg reunited with Springsteen and the E Street Band in the late 90s, and has since played on six Grammy-winning studio albums, including The Rising, Wrecking Ball, and (most recently) Letter To You. He and the rest of the band starred in Springsteen’s Super Bowl Halftime Show in 2009, headlined a decade of music festivals from Glastonbury to SXSW, gained induction into the Rock and Roll Hall of Fame, and powered through several of the longest recorded shows in music history, each clocking in beyond four hours in length (without an intermission).

Despite this near-comical laundry list of impressive accomplishments, Weinberg is apparently not content to sit waiting around between E Street Band tours. In 2017, perhaps to stave off boredom, perhaps to keep himself sharp should the Boss come calling again anytime soon, he began setting out to clubs and other smaller venues throughout the nation under the name of Max Weinberg’s Jukebox. As part of a truly interactive experience, audience members at Jukebox shows are invited by Weinberg to create that night’s setlist in real time, calling out requests from a continuously-scrolling video menu of over two hundred selections - featuring (but not limited to) everything from Springsteen highlights to hits by the Beatles, the Rolling Stones, David Bowie, Credence Clearwater, and more. Weinberg and the rest of his talented four piece group of friends oblige, and what results is a free-wheeling, joyous evening, unique from any Jukebox show that has come before or will come after by nature of its structure-less format, and all culminating with a loose performance of Springsteen favorite “Glory Days,” where as many audience members as will fit safely together are allowed their chance to share a stage (however briefly) with the E Street legend.

He’s not flashy, and has never driven a Rolls Royce into a swimming pool; he’s not known for dramatic solos of interminable length; at first meeting and to all outward appearances, you’re unsure if he’s here for a night of hard rock music or is about to help file your taxes. The wildest thing about him is the fact that he oftentimes doesn’t know what on-the-fly audible Springsteen means to call out when he begins counting “huh-one,” and yet by “four,” the mighty E Street machine has still kept churning and chugging. But slowly, surely, steady and unfaltering as one of his signature drum beats, Max Weinberg has redefined what it means to be a rock drummer for close to fifty years now. “No junior Ginger Baker” - thankfully not. There’ll only ever be one Mighty Max.

Max Weinberg’s Jukebox will be appearing at Boarding House Parking in Downtown Lowell on Friday, July 8 at 7:30PM as part of the Lowell Summer Music Series.