The Curtain Rises Again: A New Act for the Lowell Memorial Auditorium

The Curtain Rises Again:
A New Act for the Lowell Memorial Auditorium
By Andrew Cook

To say that it’s been an eventful few years at the Lowell Memorial Auditorium would be a masterclass in understatement.

Years before any notions of face masks or social distancing had entered our collective consciousness, in the blissful era when “Corona” was still most strongly associated with the popular beer brand, tectonic changes were still underway at downtown Lowell’s historic performance venue, in the form of a brand new management team. After an intense bidding war, locally-based Lowell Management Group and its CEO Pete Lally got the coveted contract from the city government to run the 2,800 seat theater in the summer of 2018. Lally, who was a top manager at the facility under the prosperous tenure of Mill City Management in prior decades, began on day one with a plan to not only invigorate LMA’s stage (which had seen a downward trend in ticket sales over the preceding years), but to introduce new ideas and new blood, and re-establish LMA as one of the leading entertainment venues north of Boston. “When we had the opportunity to be a part of Lowell Auditorium in mid-2018, it was a very exciting development for us,” says Lally. “Obviously, I had a strong attachment to the Auditorium from my thirteen years there with Mill City Management, and looked forward to being a part of it once again.  It’s a special place, and I still felt like there were shows and events to be done there that I hadn’t yet had the chance to do.”

Through 2019 and early 2020, he made more than good on that directive. In a short eighteen-month span, the Auditorium began drawing in higher ticket numbers once again, hosted the inaugural Lowell Irish Festival on the LMA grounds, and drew in the highest Golden Gloves boxing tournament crowds in nearly a decade, all while maintaining its usual calendar of community events and dance recitals. Lally and his team had, by all inner and outward standards, cracked the golden code.

But then, wouldn’t you know, there was a darned global pandemic.

“It takes a very long time to build a strong schedule at a performing arts center - years, really,” explains Dan Berube, LMG Director of Marketing. “But we had dotted our i’s and crossed our t’s to lay that foundation, and we were finally about to start reaping the payoff. Then these odd news reports started trickling in here or there, and we watched what we had built all dissolve over the course of a week. It happened that quickly. What we thought was going to be a week or two away from the office ended up being a complete reset.” 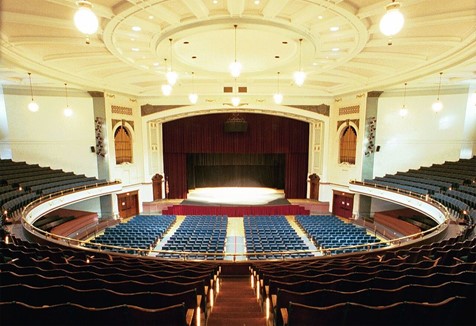 What followed was, similar to the rest of the world, a fraught, anxious eighteen months of uncertainty, with Lally’s hopes and the expectations of the LMG team dashed and dashed again by every new news conference. Unlike the rest of the world, however, the live events industry could not immediately be treated with a miracle jab from Pfizer or Moderna; the question of “when is it okay to host live events again?” depended entirely on when 2,800 ticket owners felt comfortable enough again to clap, cheer, and sing alongside perfect strangers… or, in other words, who knows when?

Day by day, hour by hour, inch by inch, however, Lally and a small core team of LMG employees clawed and crawled their way through to survive the storm which shuttered so many other Downtown Lowell businesses for good. As might be imagined, it’s a tough game to be in the live events industry without, y’know, live events, but LMG started to rouse out of its hibernation in the spring of 2021, and after a productive summer helping organize the return of the Lowell Summer Music Series at Boarding House Park and a second successful Lowell Irish Festival, Lally and his staff are ready for the curtain to finally rise on a brand new act.

Central to LMA’s return is the shared return of another long standing feature, which both staff and audiences have eagerly wished to reappear on the Auditorium stage: the Broadway Series.

“Broadway programming has a long history at the Auditorium,” explains Lally. “It’s part of what this building is, so bringing back a Broadway Series again is something I feel is really important. And not only for the auditorium, but for the City, and specifically the boost it can give to downtown restaurants. The Broadway crowd is a strong ‘dining out’ crowd as well!

“The last LMA Broadway Series was more than five years ago,” adds Berube. “As soon as LMG had taken over the reins, and then pretty much all throughout our good pre-pandemic times, one of the questions we got asked most frequently by audiences was ‘When are we bringing back Broadway?’ And the answer, finally, is now.” The three shows making their way to the stage are RENT, coming next January, The Simon & Garfunkel

Story, coming next March, and a new musical, An American in Paris, coming next May. Tickets for all three shows go on sale November 19, but those familiar with previous Broadway Series will be pleased to know that LMA is once again offering a bundled Subscribers program, where subscribers receive a discount off single-ticket prices and lock in their same seats for all three performances. This trio of shows comprises the entirety of LMA’s 2022 Winter/Spring season, a comparatively light slate to previous years, but remember: Broadway in New York itself only resumed a few short weeks ago in mid-September, and the rest of the industry is still limping its way back, so even managing three shows is impressive given the current state of things. Lally and the LMG team have plans to up the ante as things return more and more to normal (fingers crossed, in the 2022-23 season), but they’re not getting ahead of themselves.

Like the plucky hero of a Broadway show themselves, they’ve gone from humble beginnings to brilliant heights, only to be felled by disaster and sent to rock bottom. Now, like a curtain rising on the first number of a stirring second act, they’re back, bruised and battered from their ordeal but stronger than ever as a result, and with the same unflagging determination, tenacity, and hope that’s brought them here in the first place. Grab your seats, folks - this show is just getting started.